I scheduled another moulding session with my previous model. This was going to be plain sailing. I had challenged her, and she was game. We were going to create a masterpiece!!!!

We decided on a pose, that involved her hair and one hand over her left breast, and her arm partially covering the right breast.Her other arm would be slightly open on her tummy. This was to be from over the mouth to just below the arm. Copious amounts of really expensive shampoo was used as a lubricant for the hair (Yep, I was reminded of how much it cost !!)

And so we started. I had to give her privacy, so my girlfriend could pour the moulding gel over her chest. Then I stepped in, and started to work. The moulding gel turned out too runny, and was just going everywhere, except where I needed it. Ok, after a while it set, and I started with the plaster outer shell. The plaster was setting too quickly for some reason, and I was making batch after batch.

One all that had set and I had everything more or less where i wanted it, I started loosening the edges, only to find that the moulding gel had run under her back and matted into her hair.
I tried to stay calm around her, but every now and then disappeared outside to let off a bit of steam !! Actually, it was pretty funny and not!

After spending 20 minutes, trying to rescue her hair and the mould, I decided that it was a flop and was ok to rip the mould. We did try to save what could be saved. We even saved her dignity.

So now, I sat on the floor trying to puzzle this mould back into more or less two arms and one head. I must have spent about 1/2 an hour just doing that. In the meantime, the mould was drying out, and malforming.

In the meantime, my model had gone to bath, and try to wash the set moulding gel out of her now dreadlock hair. The girls spent the next hour brush and picking bits out.

Once some plaster was splashed around the mould,and this time left for the prescribed setting time,(during which time, we were all sitting around it with coffee and cigarettes, figuratively chewing our nails!). We demoulded, and it was pretty much a wreck.

Ok, I thought, lets try to make something of this, and so over the past week, have been busy resculpting, adding fingers, and so on. It has gone through quite a metamorphosis.

Here are the photos: 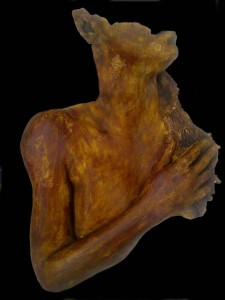 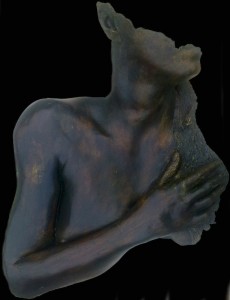 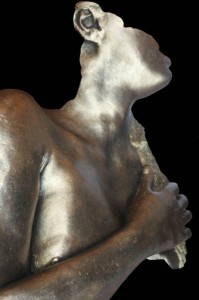 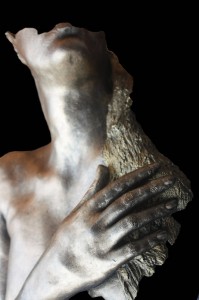 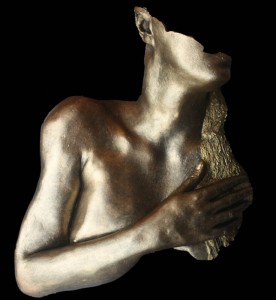 × How may we assist you?
Go to Top